The National Day of the Holy See was held on September 2nd at Expo 2017. In the official part of the event, the speakers were the Chairman of the Senate of the Parliament of the Republic of Kazakhstan, Head of the Secretariat of the Congress of Leaders of World and Traditional Religions Kassym-Zhomart Tokayev and Cardinal Peter K.A. Tarkson. During the celebration, Archbishop Metropolitan of the parish of the Mother of God in Astana Tomasz Peta read out the Message of Pope Francis to the community of EXPO 2017 .
Addressing to the participants and organizers of EXPO-2017, the Pope noted: “The way we use energy resources is a sign of how well we are carrying out the task that, according to many religious traditions, has been entrusted to us by God, namely to care for the world around us and for our fellow human beings of every time and place. If our generation and use of energy are sustainable and grounded in solidarity, we are doing our job well. Otherwise, we are not. At stake is our very dignity; at stake too are justice and peace. It is to promote an awareness of this that the Holy See has designed its pavilion at the Astana Expo on the theme: “Energy for the Common Good: Caring for our Common Home”.
In continuation of the official part, Cardinal Tarkon, referring to the objectives of the presence of the Catholic Church at EXPO 2017, noted: “The Vatican, as an ecclesiastical state, can not remain aloof when peace and humanity unite their efforts to create a future. The Vatican greatly appreciates these moments of participation in EXPO exhibitions, which give him the opportunity to serve humanity, of which he is a part and for whose training and enlightenment he is ready to share his revelations“.
In the evening of the same day, a gala dinner in honor of the day of the Holy See took place in the WECC business lounge. Guests of the evening were Cardinal Peter K.A. Tarkson, the Apostolic Nuncio in RK Francis Chulicatti, Archbishop Metropolitan of the parish of the Mother of God in Astana Tomas Peta and other representatives of the Roman Catholic Church of Kazakhstan and Russia. 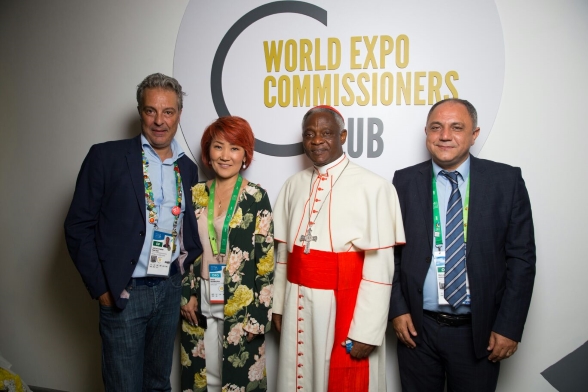